What are date night questions?

Date night questions for couples are specific, intentional questions that you ask one another in order to stimulate deep, connecting conversation. These are questions that bring up important topics for couples to discuss that may not come up organically. Their intent is to help foster connection and intimacy and to help couples continue to be students of their spouses.

You likely speak to and communicate with your spouse regularly, but often the topics are practical and mundane. We rarely start discussing our deepest fears or desires without first being prompted. But these things are so important for us to continue to discuss with our spouses.

Date night questions help us to keep a gauge on our relationships, how we’re loving one another well and what is going on in the deepest parts of our hearts. This is what keeps the connection deep and strong in marriage.

You cannot have a connection without vulnerability and exposure.

RELATED: How to Have a Meaningful Date Night

So, how do you use these date night questions for couples?

That is entirely up to you! You can do just one per date night or plow through 10-20 if you want to.

Personally, my husband and I go through about 5-ish questions on any given date night.

With each question, one person asks the other, lets them talk and then you both follow the conversation that flows from the answer. Once that line of conversation ends, you reverse and the other person asks you the same question. We are intentional about making sure each person gets to answer, even if we get off on a tangent.

We mark our place and continue with the list on our next date. The conversations that stem from these questions allow us to learn about the other person’s heart, to laugh and to feel the same excitement & intimacy we felt when we were dating.

Date night questions are a simple way to take your conversations to the next level and connect deeply as a couple.

So, here is your list of questions to encourage your relationship and help you to connect with one another! 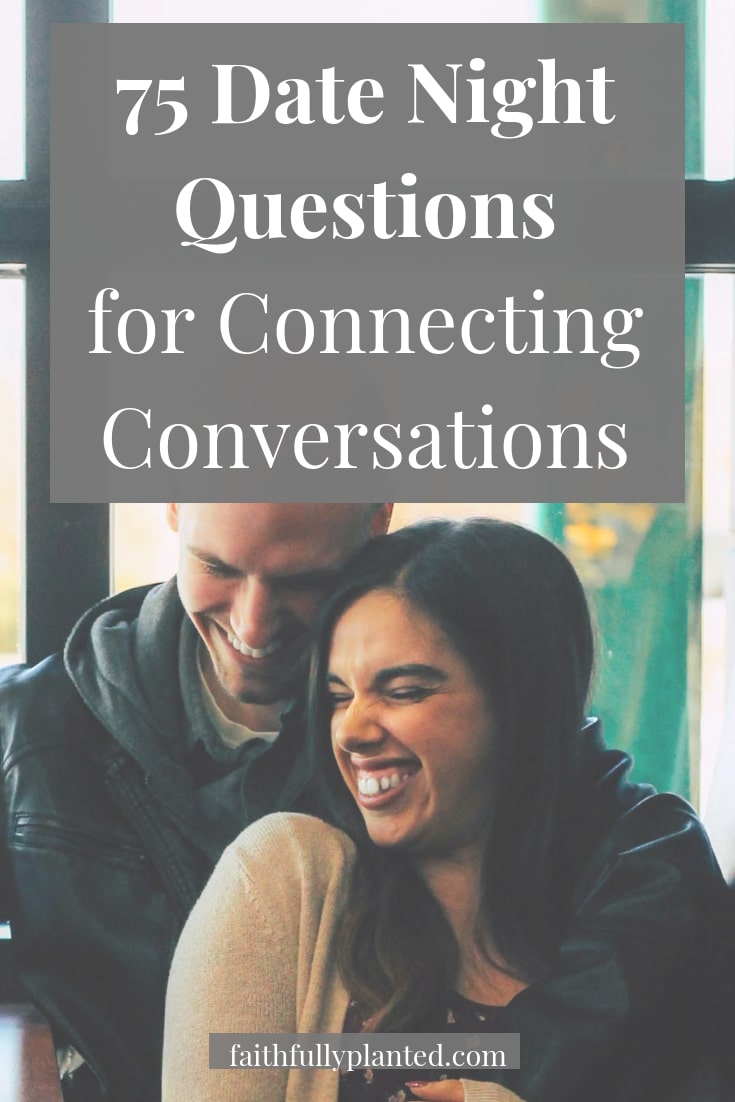 Phew! That’s a lot of questions. But my husband and I use these all the time and I wanted to get as many of them into your hands as I could. I know they will bless your marriage as well.

Friend, I am praying these date night questions bring connection, depth and some laughter to your relationship.

You know, sometimes Mr. King and I just need a date night. A time to ourselves where we can set our responsibilities aside and enjoy each  other’s company. It’s so important to spend that time together and cultivate a strong relationship. A strong marriage relationship sets the foundation for a strong family! But after a while it can be hard to come up with date ideas. We want to mix it up! We want to try something new! Going to the same couple restaurants every time gets boring, and when we just go to a movie we aren’t really engaging with each other. So I sat down and came up with a list of ideas we could try. Then I thought, we can’t be the only ones looking for new ideas! So, I’m sharing the magic with all of you!

For 15 more fun ideas, head over to My Cup Runs Overand check out her list!

As rare as our date nights are, this list will last my husband and I a LONG time! I hope you find some ideas you can use to make your next date night magical! Let me know in the comments what your favorite ideas are!

Today’s guest blogger is Jennifer Love from Intentional Traditions. I chose this post because it reminds me so much of the way David and I became one – we were friends for many months before he decided to fly from Hawaii to Georgia.

The day of our first date was an uncomfortable one. I had spent the afternoon making small talk, finding it hard to make eye contact. I had scratched at the peeling edge of the café table and sweated, shifting around in my chair and anxiously sipping my coffee. There were words dying to be said but they just couldn’t pass through my head to my lips. I had stalled all day at telling my best friend that I think I had agreed to a date that night with one of our “friends” and I wasn’t sure how she was going to take it.

For some reason this seemed almost as nerve-wracking as the actual first date. We had always been a group of buddies and secretly I had thought that was an okay status to change between he and I but didn’t want to admit to it yet. To me, it almost seemed long overdue, and at the same time impossible. To her, was this crazy or obvious or weird? For some reason, I just could not say it.

Finally, when coffee mugs were dry and it was time to leave after hours of lingering, I blurted out, “I think Donnie asked me out for tonight. Like on a date.” She smiled and was encouraging. She could see how this was good. She knew the deep friendship that was there and didn’t find this announcement earth-shaking. She laughed that this had taken me all day to say. I had been silly.

The Stakes Were High

So, from there I got to move on to my second concern. There was a weight to this decision to let him take me out to dinner because: we were both pretty serious people; it was nearing the end of my senior year of college; we had known each other for almost 4 years; and we weren’t the type to date people we didn’t respect enough to at least consider marrying. This could potentially be a step out of the friend zone with no return, other than to mess things up with a really good friend. That’s a scary step.

I wasn’t even really sure what I had agree to. We always hung out as part of the same crowd and often shared dinner together. He had called and left a goofy, macho message about meat and potatoes and eating on February 14 to which I said I had plans with my girl friends to go out and laughed it off.

When he called the next day with the same question I assumed he needed more than a ride down to the cafeteria. It’s really strange how awkward and nervous you could morph to feel around some you had pranked, tripped, picked on, argued with and flirted with in front of others for years. Suddenly I had no idea what to wear for someone I had sat beside at lunch a hundred times and who had seen me in sweaty, grubby clothes doing service work.

He did pick me up, for a change, in his little brown pick-up truck and drove about 3 minutes away from campus to a local restaurant I had only been to a few times for special birthday parties with friends. The ceiling of the restaurant was painted black but dotted with tiny lights to mirror the night sky. He was being gentlemanly and sweet but it didn’t seem to hard to receive.

Any tension quickly dissipated as we fell into our old habit of cutting right to intense, honest, challenging conversation. For two hours we relived childhood memories, detailed dreams for our individual futures, poured out convictions, beliefs and expectations for life after graduation. It was easy. It was comfortable. Much of our dreams were very similar. But we already knew that.

I remember leaning back in my chair thinking, This is how conversation should be with a guy. Easy, comfortable, understood. I felt respected, admired and encouraged in who I was and my ideals. And I knew in many ways I was an odd one. He made me feel like that was a great attribute.

I do not remember at all what we ate. But long after the plates had been cleared by the waiter, we were still sitting there talking and unhurried to move on. He then pulled out a deck of cards, which embarrassed me slightly but I agreed to see his magic trick.

Without disclosing a magician’s secrets, it was one of those decks that looked normal when you spanned it one way but blank when you spanned them the other. What had looked typical really wasn’t, like the underlying potential in our friendship.

Maybe I hadn’t noticed what had been there all along, huh? Slick.

Maybe I should consider him since we know each other so well and see where it goes?

Ironically, that speedbump I expected from “friends” to “dating” seemed to be easily passed. Like miraculously. We walked out of that restaurant moving into the future we had spent the evening expressing that we wanted, not knowing that each other would play the main character from then on out.

Every moment of every year since then may not have been perfectly easy, but the foundation of our friendship – knowing his good (but intense) heart, trusting his passionate (but stubborn) decisions, appreciating his spontaneous (but sometimes careless) will, and now even more, his desire to chase the Lord despite any costs – that foundation made all the difference in riding out any tough spots. We knew what was at the core of each other and trust in that could not be given up on. Any opportunity that has come up since then we’ve said, Yep, let’s do it. Together. And our life has been incredibly blessed. And interesting.

Fifteen years have quickly passed by and I’m so glad I made the brave choice to date my “friend”.

So, now I am the one meeting with college students and helping them navigate similar relationships. I have to answer that question of, “Why should your husband be your friend first?”

In an age when it seems easy to quit early or trade up, we had looked through the window of the soul into what is most important and what will remain. That is what you want marriage based upon.

Honestly, much of grown-up life can be mundane. Paying bills, making lists, doing yard and house work, grocery shopping. Why not choose to be with someone who knows and loves you for who you are, who can make you laugh, and can make those potentially mundane moments enjoyable?

That level of friendship and love is what I want to have to model and pass down to my kids. What I’d love to hear (someday) from my boys is, “I want to marry my best friend, like my dad did.”

You can read here His Side of the Story… and what we plan to teach our boys about friendship and dating.